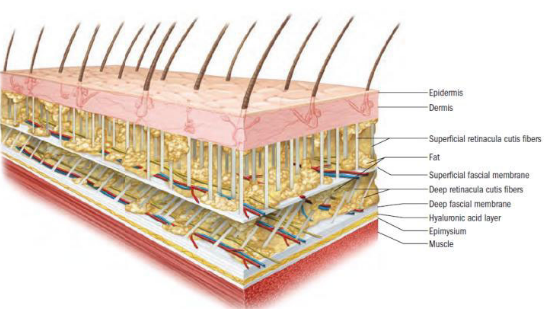 Kinetic Flossing is mostly based on the theoretical background of fascial treatment, Blood Flow Restriction (BFR) and Kinetic Control theories.

Myofascial Release
Kinetic Flossing is based on the fascial treatment as first described by Ida Rolf and Thomas Myers. Its primary goal is to dissolve adhesion and loosen trauma-induced scar tissue, as well as restore the elasticity of the connective tissue through the shear effects and controlled micro re-injuries.
The myofascial release applications are based on the detailed knowledge of the function and physiology of the fascial system. A fascia is a band or sheet of connective tissue, primarily collagen, beneath the skin that attaches, stabilizes, encloses, and separates muscles and other internal organs. The most interesting part of this ‘’organ’’ is that it is not a system that consists of different parts, but it is a structure that extends from head to foot without being separated at any point. In this way we understand that all parts of the human body are connected to each other via the fascia. The fascia mainly consists of collagen and can be stretched and moved freely.
It is understood that the high compression applied to the soft tissue with Kinetic Flossing will trigger neuromuscular adaptations. During the application of Kinetic Flossing, a compression is transferred between the soft tissue and the fascia layers. Friction and shear effect help to release possible fascia restrictions and adhesions, to avoid scar tissue deposition, to stimulate collagen production and improve movement between the fascia layers.

The hemodynamic adaptations during the flossing application, include the initial reduction of blood flow in the treatment area and the subsequent enhanced blood flow after the rapid loosening of the flossband. This procedure influences the microvascular morphology and increases the fibroblastic activation. The hemodynamic adaptations that occur after the flossing application contribute to
a) the stimulation of anabolic processes in connective tissues (collagen fibres) and the restoration of them
b) the clearance of the treatment area from the metabolic by-products (inflammation-pain metabolites) which are squeezed out by the compression and then washed out by the subsequent hyperemia

There has been a great deal of research that highlights the importance of using Blood Flow Restriction training (BFR) in both rehabilitation and day-to-day workouts. Subsequently what happens is that there are biochemical changes in:
a) muscle oxygenation
b) fiber type recruitment
c) metabolic accumulation
d) growth hormone response
e) stimulation of protein synthesis
f) muscle growth inhibitors

Kinetic Flossing aiming to minimize the venous outflow from a muscle, while also reducing the arterial inflow which leads to:
• Increase muscle mass, strength, and endurance at loads below 50% of max (studies show similar benefits to training at 70% of max)
• Prevents or slows atrophy
• Increased type-2 fibre recruitment — greater potential for strength, speed, and hypertrophy changes
• Increased local growth hormone and IGF-1 levels by 200-300%
• Enhanced stimulation of muscle protein synthesis by 45-55% — greater potential for growth and development with exercise

In this context, considering that periods of immobilization (or reduced functionality) due to pathology, injury or surgery cause harmful effects on muscle mass and strength in both young and old people, muscular adaptations of occlusion exercise could benefit as much as the elderly and the post-operative patients in rehabilitation in muscle regeneration. Furthermore, the muscle adjustments offered Blood Flow Restriction training in combination with the low stress required by the athlete (if compared with the classic high resistance training) could powerfully integrate it into the coaching protocols.

Kinetic Flossing application in joints enables the therapists to mobilize the wrapped joint(s) in a wider range of motion without pain. The gate control theory could provide an explanation for the pain reduction. The high compression of the band that is wrapped with considerable force provides an intense mechanical stimulus, which causes the pain to be inhibited. The information pathway from the Nociceptors (pain or damage) gets interfered through the compression so that the patient tolerates bigger range of motion, if there is an acute pain. Therefore, the mobility increases. There is a direct influence on proprioception and sensorimotor function as a result of forced movement under compression.